Posted by Matthew Smith at 23:07 No comments: 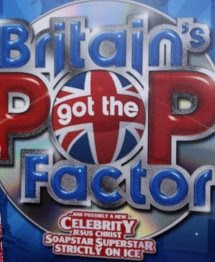 Just been watching Peter Kay's Britain's Got Some Extra Pop Factor... and Then Some (his parody of X Factor and the rest). He only went and did my Stephen Hawking on Hole in the Wall gag!

And they're having a pop at Facebook ("Friendface") on The IT Crowd. Good ol' Channel 4.
Posted by Matthew Smith at 22:21 No comments:

I still don't get it. Or rather I get it, but I don't 'get' it. I'm talking about Facebook again. I just don’t know why people rave about it and feel the need to update their profile every 6 minutes. I can see that it can be useful for sharing photographs and the like, but other than that it seems to me to be a bit of a waste of time. Having said that, I guess some would argue much the same can be said for blogging…

The reason Facebook has resurfaced in my psyche is that yesterday I received another Facebook “friend request” by email. I get these every so often, sometimes from people I know and sometimes (more often) from complete strangers. I usually just delete them but this one was at least from someone I have met (but only once or twice so does that count as a “friend”?). I clicked on the link to go to the dreaded Facebook site. Turns out I have 51 friend requests that I haven’t yet confirmed. Oh dear… I hope no-one has taken offence. Although given that most of them are people I’ve never met then f**k ’em. 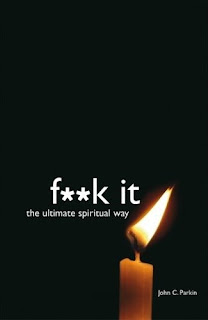 That seemed a little harsh didn’t it? But I was just taking a leaf out John Parkin’s book. It’s a great book. Or at least a book with a great title... it’s called F**k It: The Ultimate Spiritual Way (published by Hay House). Rachel has bought it for a friend for Christmas so I had a flick through it (I'm secretly hoping she might have got me a copy for Christmas too!).

The idea is that sometimes we just need to say “f**k it!”. We need to realise that much of the time (perhaps all of the time?) things just aren’t worth getting stressed about. According to Parkin, saying f**k it encapsulates much of the philosophy of Eastern wisdom (given a nice Western vernacular spin!). There is a Fuckitway.com website, where you can read more, buy a f**k it chocolate bar (or say f**k it and buy a whole box), and even book yourself a place on a f**k it holiday in Italy! They also have a page on, ahem, F******k.
Posted by Matthew Smith at 19:09 1 comment:

Today I finally submitted the manuscript for an edited book called Anomalous Experiences. It's a collection of papers that were originally presented at a conference called Developing Perspectives on Anomalous Experience in June 2005, and covers research on unusual experiences ranging from out-of-body experiences, alien abduction experiences, haunting experiences, and ESP. There were plenty of times over the last three years that it looked likely that it would never happen so I'm very pleased that it's finally been done. It's due to be published next year.
Posted by Matthew Smith at 23:26 No comments:

It happened on Saturday evening around 5.30. I'm not proud but... I watched Hole in the Wall. Look I said I'm not proud. 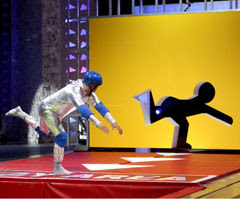 You've not seen it? Then let me try to describe it to you. Two teams of "celebrities" (if you watch it you'll understand my use of the quotes) compete to avoid getting knocked into a pool of water by a wall moving towards them. Now here's the thing... there is a hole in the wall. The only way to avoid getting knocked into the water is to assume a pose that matches the shape of the hole. And that's it! It is quite spectacularly awful television. But, and here's my only defence. It is strangely watchable.

When the guests have no chance of making the shape, it becomes even more watchable. Like when Vanessa Feltz, clad in bacofoil jumpsuit, wouldn't fit through any of the holes. Should be interesting next week when the guests are Stevie Wonder and Stephen Hawking.
Posted by Matthew Smith at 23:02 2 comments: