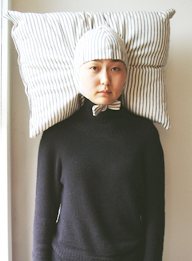 In looking for the image of the guy sleeping for the previous post, I discovered a whole load of bizarre pillows you can get. For example, the happy looking lady in the picture on the right has on a wearable pillow that could mean you would never lose your pillow again, no matter where you were! Note the matching bow-tie. 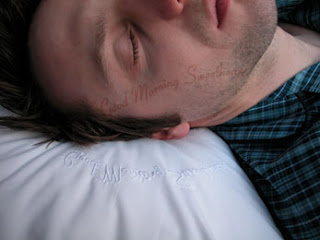 embroidered in reverse on its surface. This becomes imprinted on your face as you doze, meaning you can bid your partner good morning without having to open your eyes (or mouth). 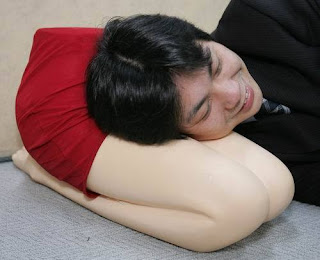 parts (don't worry, we're going to keep it clean). First up is the lap pillow, in the shape of a woman's kneeling legs. Pay no attention to the fact that the woman on whose lap you are sleeping has had her torso severed from her lower limbs. That will just give you nightmares. 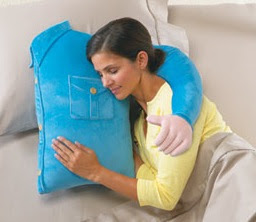 For those of you who prefer to have an
arm round you while you're sleeping, there's the boyfriend's arm pillow. I suppose it doesn't have to be a boyfriend's arm. It could easily be a husband's arm, a girlfriend's arm, or a stranger's arm. Whatever gives you the most comfort. You could even think of it as 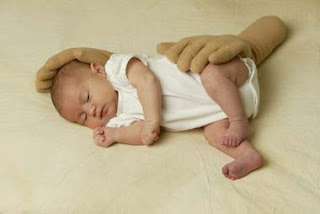 a piece of material, filled with stuffing,
shaped in the form of an arm and hand, but then that would just be CREEPY, wouldn't it?

It is even possible to get severed-limb pillows for babies. The 'zaky' pillow is the shape of a pair of hands that hold the 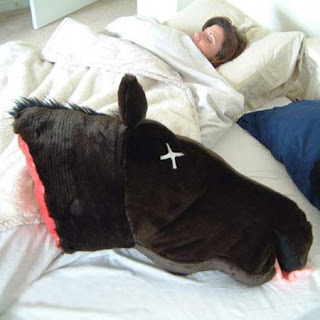 baby as though they are being comforted by their parent's hands. The idea of this pillow is to overcome that moment when babies waken just as you take your hands away.

But, if human body parts don't float your boat, you could always go for a severed animal body part. For example, 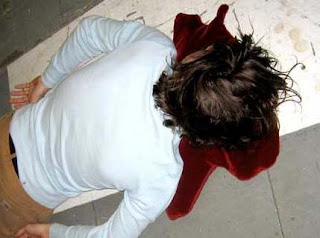 nothing else quite says, "You're next!" as effectively as a horse's head pillow. Apart from, maybe, an actual horse's head.

But I think the winner in terms of the most bizarre/disturbing has to go to the blood spill pillow (or blood spillow, if you will). This is what might happen if someone was to take away your pillow very quickly, if your bed was made of concrete... and maybe there was spike beneath it. You get the idea.
Posted by Matthew Smith at 23:37

Email ThisBlogThis!Share to TwitterShare to FacebookShare to Pinterest
Labels: pillows