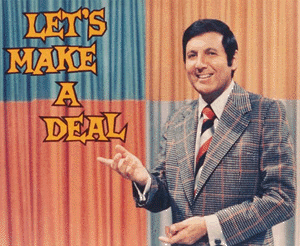 Long before Sir Noel Edmonds* wasted hours upon hours, but making shedloads of money, opening boxes in Deal or No Deal, there was a US show called Let's Make a Deal. This included a far less drawn out affair in which contestants chose one of three doors. Behind one of the doors was a prize, such as a car, whilst behind the other doors lay nothing. Once the contestant had made his or her choice, the show's presenter, Monty Hall, would then open one of the doors that had nothing behind it and ask the contestant if they would like to change from their original chosen door (which remains closed) to the one remaining door. And that was it.

Doesn't sound like much, does it? But it lay the basis for one of the most talked about mathematical 'problems' of recent years. The question was, should the contestant stick with their original choice or should they change their mind and choose the other door? Does it make a difference? Which would you do?

It became known as the 'Monty Hall Problem' and the perhaps surprising and counter-intuitive answer is that you should change doors. By changing doors, your odds of winning the car double, from 1 in 3 to 2 in 3. You might think that changing doors would make no difference, but you'd be wrong. You might even think that it would be better to stay with the door your first chose, as at least that way you are less likely to feel regret if you end up not having chosen the winning door: Wouldn't it be worse if you changed your mind and found that the door you had first chosen was hiding the car all along? You would feel as though you almost had the car in your hands and then lost it. But the statistics say you'd be wrong not to changed your choice. If you stuck with your original choice you would halve your chances of winning the car!

I'm wondering if there are similar statistical surprises hidden in Deal or No Deal? Or is it just Noel Edmonds randomly opening boxes hour after hour?

*As far as I'm aware, Mr Edmonds is not a Knight of the Realm, nor are there any plans to make him one. It's just that I think he deserves one. Not for Deal or No Deal. God no. I'm referring to his sterling efforts presenting Multi-Coloured SwapShop back in the 70's. If he managed to swap a pair of roller skates for scalextric once, he must have done it a dozen times.**

**Speaking of which, if anyone has any scalextric track they would like to swap for, well, a pair of roller skates then put your details in one side of a postcard...
Posted by Matthew Smith at 00:58