One day you'll be dead

[This article is due to be published in a new magazine called Haunted. It is reproduced here by kind permission of Will Felix.] 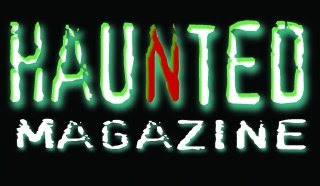 Some weeks ago, a certain Mr Felix rang me up to tell me he was planning on publishing a new magazine (yes, the very one you now have in your hands). He was looking for people to write for the magazine who were credible and authoritative on all things paranormal. And so, he contacted me… to see if I knew anyone who was credible and authoritative on all things paranormal. As I couldn’t think of anyone who fitted the bill, we agreed I could write something instead. And here it is.

By the way, I’m sorry if the title of this article sounds a little harsh. And I hope it isn’t too morbid to be talking about death (although I guess morbidity and death kind of go hand in hand). And I really hope that this news hasn’t come as too much of a shock to you. But it’s true. One day you’re going to be dead. You won’t be here any more. You’ll just be a memory in the minds of those who you have left behind. It’s a sobering thought isn’t it? And for many people it can be sufficiently motivating to encourage them to get off their backsides and get on and start doing the things they always told themselves they would do before they died. And these days there are plenty of books that will tell you all the places you need to see and all the things you’re supposed to do before you die. So I’m not going to do that. (Suffice to say that visiting Stapeley Water Gardens really should not be on anyone’s list. Don’t be fooled by the title… it’s just a garden centre.)

Instead, I want to ask the question of what it is you’re going to do after you die. For some of you this is probably an odd, if not meaningless, question. What am I going to do after I die? Not much. Very little in fact. I might even be so bold to say I’m going to do nothing at all. And I think this is a very understandable response, and the reason that many people regard their lifetime as a finite period in which to do all the things they want to do, as there isn’t going to be any second chance.

But for many of you (in fact possibly most of you given that you’re reading this magazine!), this might be a question that is reasonable to ask. There are a number of possible answers you might opt for. You might be taken with the idea of taking your place in Heaven (or maybe even somewhere warmer?) Or the whole notion of reincarnation might be more up your alley. You could come back as a dog, or a flower, or even just come back as yourself again and try and get it right next time (although that one just seems to be rather lacking in imagination to me…). Or maybe, just maybe, you’ll come back as a ghost and haunt people.

Now, if we’re to entertain the possibility that death is not the end. If we are to consider the hypothesis that there is another kind of existence waiting for each and every one of us after we shuffle off this mortal coil. If there really is some kind of afterlife, then I’m not so sure that the idea of spending eternity (which I gather is quite a long time) haunting a draughty old castle or an underperforming public house is that appealing. Why would anyone want to spend their afterlife doing that?

Some ghosts, it seems, like to make their presence felt by moving or throwing things around or by making banging or rapping sounds. Strictly speaking, paranormal researchers like to separate these phenomena from other types of haunting which are usually associated with apparitions. Instead they like to refer to these as ‘poltergeist’ phenomena (‘poltergeist’ literally means ‘noisy spirit’). Whilst some parapsychologists feel that these kind of effects, if genuine, are more likely to be explained in terms of some kind of ‘psychokinetic’ (literally ‘mind movement’) ability among the living, there are those who prefer the noisy spirit interpretation. And it would seem that some of these effects can actually be quite subtle. A student of mine recently described to me an apparent poltergeist experience in which it seemed that something or someone caused the TV remote control to move from one arm of the sofa to the other. Spooky. Again, though, question has to be why bother? Is that really the best use of being able to transgress the known laws of physics and prove that there is an afterlife. You’ve just had your Near-Death Experience, although in fact it was your Actual-Death Experience because you don’t come back from this one and after travelling down the tunnel towards the light you have passed away and you have reached your ultimate resting place. But instead you actually realise you’re able to communicate with the living and make it known that you continue to exist in some kind of spirit world. So what do you do? You move the remote control from one end of the sofa to the other. Brilliant. I’m sorry but if that’s what the afterlife is all about, then I’m not impressed.

The other option, it seems, is to let everyone know that you’re still around (in some kind of non-physical spirit reality) by actually telling them this news. For this, you’ll probably need to find yourself a decent medium who will be able to pass on your messages. And that could be easier said than done. A good medium is actually quite rare (some would say non-existent!) as many (some would say perhaps all) who claim to be mediums are either charlatans or are deluded.

But if you do manage to communicate with one from the ‘other side’ then please try to make any messages that you are sending through as clear and as specific as possible. It must be very frustrating for those genuine mediums (ahem, if there are any…) to receive and pass on messages that are intended for “somebody whose name begins with ‘B’, or ‘P’, or could it be ‘T’…? Barry? Harry? Carrie?, etc.”. That’s no use to anybody really, is it? All that does is make the medium look, well, a bit silly. No, if you can, try to be as specific as possible. Why not give first names and last names? An address or two would be really good too, perhaps even a date of birth. That would give the sceptics something to ponder over. Oh, and if you want to try and prove that you’re real by telling the medium how you died then you’ll have to do better than clutching at your chest, “He’s clutching at his chest… he’s saying it’s his chest, he’s finding it hard to breathe…”. Would that impress you? No, again you need to be as specific as possible. Why not tell us the time you died? Or where you were when it happened?

Perhaps I’m asking too much, but let’s make an agreement now. When we are dead, if it turns out there is an afterlife we’ll make sure the people we have left behind know about it. Deal?

Now, where did I put that remote control, I’m sure I left it on the end of the sofa…
Posted by Matthew Smith at 11:33