Under the Umbrian Sun 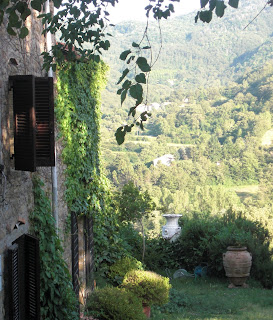 And so it is that we are sat outside Scopeto, a glorious stone-built cottage tucked away in the Umbrian hills. Rachel’s internet searches have really come up trumps this time. A week of relaxation should be pretty easy here, with only the sounds of birds, and the occasional lizard to distract you. Our own private pool catches the sun* all day, there are three different terraces on which to sunbathe, and the view across what feels like our own private valley is a delight.

It will be our longest time away from Freya. She is spending the week with her grandparents in a cottage in Northumbria. They are joined by Alice, the 17-year old daughter of friends Lynn and Ron. I’ve got a feeling that Alice is going to become Freya’s new best friend. On the flight from Gatwick to Bologna, we seemed to be the only couple who weren’t accompanied by a young child or two, which initially made us miss Freya even more but by the time we were waiting in line at Bologna airport to collect our hire-car, we were simply grateful we weren’t one of the couples having to chase after and/or manhandle a fractious toddler who was getting bored/hungry/tired etc.

The convertible (“cabrio”) Mini that Rachel had hired for the week didn’t materialize. We had imagined ourselves cruising down the Italian highways with the top down with the sun on our heads and the wind in our hair. 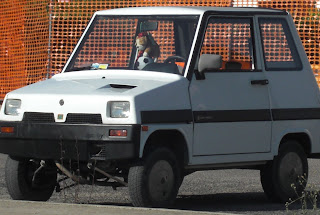 “No cabrio” the surly man behind the Eurpocar desk informed us, “I can offer you CinqueCento”. I looked to Rachel, “that’s one of those crappy little Fiats isn’t it?”. Rachel was already letting Signor Surly that she wasn’t best pleased with being offered a CinqueCento when she had booked and paid for a cabrio. None of the other car-hire companies had cabrios either but the one next door did at least offer us an Alfa Romeo which has to be better than a CinqueCento, so we cancelled the Europcar booking and went with the Alfa Romeo.

A few hours later, after a drive through some beautiful countryside, we arrived at Scopeto. Nearest village San Leo Bastia, nearest town Trestina. We’re about half an hour away from Cortona. It’s beautiful.

*Note for readers in the UK. The “sun” is a large firey ball in the sky that sits behind that grey blanket we call cloud. In other countries, it is seen on more than one or two afternoons of the year.
Posted by Matthew Smith at 21:44