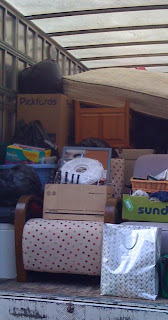 The sound of broken glass being shoveled into a bin is not the sound you really want to hear at the end of a house move.

Saturday saw us move from the North (well, Knutsford... "posh North") to the South (where they're all posh aren't they?). All seemed to be going well, right up to the point where I pulled out one of the bookcases that half a second later I remembered was propping up seven or eight framed pictures. It was the huge great crash of glass splintering that reminded me of this fact.

As it turned out, it sounded worse than it was. It was the glass in only two of the pictures that had smashed. I'm learning to always look for the positives.
Posted by Matthew Smith at 21:26