It started with a singing bear. Not just any singing bear. This was Bear. From The Big Blue House. Freya is a bit of a fan of Bear. So, in the weeks leading up to Christmas, Rachel discovered a singing Bear for sale on eBay. At £6, it was a bargain. However, by the time it arrived through the post, we figured Freya would prefer a non-singing version (fickle I know). So Rachel re-advertised the singing Bear on eBay. A few days later and it was sold. For more than double what she paid for it! 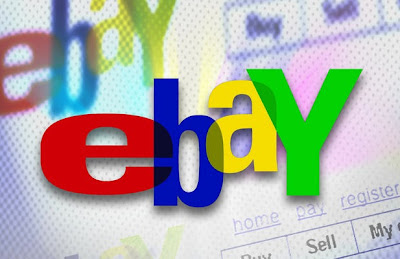 With dollar signs in our eyes, we looked round to see if there was anything else we could sell on eBay. Our eyes fell on Freya's old pushchair. Although, of course, it's not just a pushchair is it? It's a pushchair-pram-car-seat combination. Limited edition no less. We had been meaning to sell it for some time, but hadn't got round to it. But buoyed by the success of the singing Bear, I gave it a thorough clean and took a few photos. Rachel did the technical bit of putting the listing on eBay, as I must admit to being an eBay virgin (as in I have never used eBay not that you can bid for my, ahem... well, you knew what I meant). Before you could say, "pushchair combo up for sale," the pushchair combo was up for sale! The auction would last for seven days. We would have to wait and see if anyone would actually bid for it.

Before long, there was an opening bid of £100. Not bad! We would have been happy with that, but there was soon a second bid of £105. Bidder 1 quickly responded with a return, and frankly unusual, bid of £129.99! As far as I understand how eBay works, each subsequent bid is supposed to go up by a certain minimum amount (e.g., £5), but you can put in 'automatic' bids so that if another bidder bids higher than your first bid, it will revert to your automatic bid, if it's higher than the second person's bid (are you following this?). Bidder 2 must have done this because his or her next bid was just a penny more at £130. Bidder 1 must have done the same, as it then jumped to £132. Meanwhile, a third bidder (let's call them bidder 3) had been watching this and upped the ante with a bid of £150!

Things were now hotting up. It was obviously too rich for bidder 2. But bidder 1 was having none of it. He/she hit back with a bid of £165.99. But it was to be short-lived. A few hours later, bidder 3 jumped to £190. Rachel and I just watched as the bids rose. We were just pleased that anyone wanted to buy the pushchair!

Things went quiet for a few days. Rachel assured me this was typical. If there were to be any more bids, they would be just before the bidding deadline, so we didn't expect any more movement for a couple of days. Even if there were no more bids, £190 would have been a good selling price!

As the final hour of the auction approached, we kept an eye on eBay just in case there were any more bids. As Rachel had predicted interest returned. A brand new bidder who we'll call, for the sake of consistency, bidder 4, pitched in with £195. But bidder 4 hadn't appreciated that bidder 1 had been in this from the very beginning (although the name 'bidder 1' in the bidding history may have given it away), and wasn't going to let this Johnny Come Lately (not his real name) steal the glory. Bidder 1 offered £200.

All remained quiet as the final minutes of the auction ticked by. There was less than a minute left when bidder 4 upped the stakes with a bid of £235! But bidder 1 didn't want to lose this. They offered £240. But with seconds to go a bid of £261 from bidder 4. Surely that was it.

Exciting stuff this eBaying! Now, what else can we sell?
Posted by Matthew Smith at 08:38