This week I have watched a TV documentary called Five Steps to Tyranny three times. It is something we show to our first year psychology students as part of one of their seminars. As I take three separate seminar groups, I have sat through the film three times this week!

The film is a very useful introduction to how social psychologists explain how it only takes a few key ingredients to turn any one of us into someone who might inflict terrible harm to others. Step 1 is that from an early age we identify with various 'in-groups' of which we regard ourselves to be a member, and can contrast those with 'out-groups' of which we are not a member (i.e., 'us' and 'them'). Step 2 is that we readily obey orders, often without questioning them. More worryingly, perhaps, when there is an authority figure who asks us, or commands us, to do something that we might normally not want to do (Step 3: do 'them' harm) we will often follow the command especially if we feel that someone else will take responsibility. The eye-opening research conducted by Stanley Milgram in the 1960's revealed the extent to which this was the case. Around two thirds of people who participated in his studies of obedience (who thought they were taking part in research on the effects of punishment on learning) would go on to deliver electric shocks to a co-participant of 450 volts when told to do so by an experimenter. (The co-participant was actually a confederate of the experimenter who never received the shocks, but the real participant wasn't told this until after the experiment.) Experts in human behaviour had predicted beforehand that only a very small percentage would administer these shocks. 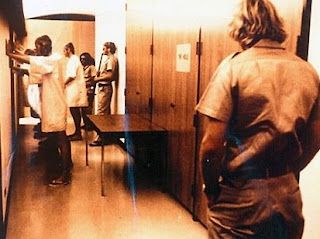 Step 4: 'stand up' or 'stand by' shows how many of us are far more likely to stand back and do nothing when we see somebody who might need our help. Combine this with step 1 and we are particularly reluctant to offer help to someone who we see as being in an 'out-group'. By the time we get to the final step, 'exterminate', we've reached the point there is every chance that members of a more powerful 'in-group' will seek to get completely rid of any 'out-groups'. It was the research of another psychologist, Philip Zimbardo, which demonstrated this so effectively. In his Stanford Prison Experiment he turned the basement of the Psychology Department at Stanford University into a prison. Male students were arbitrarily split into either 'prisoners' or 'guards' and asked to role-play these roles as part of the planned 14-day experiment. As it turned out, after just 6 days the guards had become sadistic and were treating the prisoners so badly the study had to be stopped.

It is through these 5 simple steps that, according to social psychologists, tyrannical regimes can emerge and be allowed to continue to exert their power.

The full documentary can be found here.
Posted by Matthew Smith at 00:02