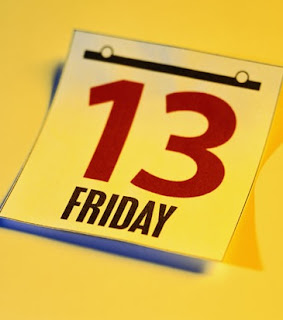 Today is Friday the 13th, the first of three this year. And it would seem that on Friday the 13th there really is an increased chance of being involved in an accident even though there is less traffic on the road. A study conducted in the early 1990's*, compared the number of traffic accident casualties admitted to hospital in the South West Thames region of England on Friday 13th's with the number of admissions on Friday 6th's during the same period. The researchers found that there were consistently more admissions on Friday 13th's than on Friday 6th's (a total of 65 in the period examined compared to 45, an increase of more than 50%). The difference was statistically significant.

The researchers did a similar comparison for the amount of traffic on the roads on these days (specifically certain sections of the M25 London orbital motorway). They found that there were actually a little over 1% fewer vehicles on the road on Friday 13th's compared to Friday 6th's.

If these data reflect a genuine difference between the two days, then maybe Friday the 13th really is an unlucky day! What I think it might reveal is that people's beliefs about Friday the 13th could become a rather neat example of a self-fulfilling prophecy. That is, a small percentage of people (around 1%) may be sufficiently superstitious about Friday the 13th being an unlucky day that they avoid driving (or at least motorway driving). Those drivers that still decide to get in their car may still be aware of the superstitions surrounding Friday the 13th and this may actually increase their fear and anxiety enough to affect their concentration while driving.

I stayed at home today.