Luck is no accident

A book arrived from Amazon this morning as a consequence of having looked at Richard Wiseman’s blog last week. One of his recent posts mentioned that the current issue of Newsweek included an article that featured his research on luck. The article was actually adapted from a new book written by Ben Sherwood called The Survivors Club: The Secrets and Science That Could Save Your Life (Grand Central Publishing, 2009). Ben had been the guy who had interviewed me about luck last year for an article for O, The Oprah magazine (I wonder if that is published yet?). 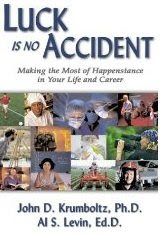 However, the book that arrived this morning isn’t the one by Ben Sherwood (though perhaps I should order that one too!). No, it’s actually a book I discovered by following the link Richard had included to another website, called Get Rich Slowly, that also referred to the Newsweek article but focused more on Richard's work. It was this website that linked to an earlier article (are you following this?) that reviewed a book called Luck is No Accident: Making the Most of Happenstance in Your Life and Career by John Krumboltz and Al Levin (Impact Publishers, 2004). It was this book that I ordered from Amazon and which arrived this morning. The message of the book is very similar to that of Richard’s book The Luck Factor (2004, Arrow Books), although the focus here is on making the most of unplanned events.
Posted by Matthew Smith at 12:02