Why the long face?

The last time I sat on a horse, I cried. I was probably about 9 years old at the time. My sister, Sally, went to horse-riding lessons and so my mum took me and my brother, Anthony, along too. The first few times Anthony and I would just play around while we waited for Sally to have her lesson, but eventually my mum thought it might be a good idea if me and my brother had a lesson at the same time. I don't really remember if we had a choice in the matter, but before we knew it we wearing hats and boots and were lined up next to each other on our respective horses. Sally was on her quite respectable looking mottled grey steed whose name I don't remember, Anthony was on a smaller, hairier, horse I think called Snip, while I was rested upon an animal that went by the name of Jason.

Now Sally, of course, was a more than willing participant in the lesson (indeed she was the reason we were there in the first place) and so no doubt found the whole thing rather enjoyable. Perhaps even fun. But my brother and I were more reluctant riders and so found it less enjoyable. Traumatic even. Anthony probably had the tougher horse as Snip seemed to have trouble seeing through his shaggy mane that fell over his eyes and would often stop half way round the ring to graze on the grass over the fence. My horse, Jason, seemed to be more up for it but paid little attention to what I was doing with the reins or my heels and decided to do whatever he fancied doing in whatever direction he fancied doing it. Which I personally think is fair enough. But you try telling the horse-riding teacher that. (I use the word 'teacher' but I think fascist cow is nearer the mark.) From the beginning to the end of each lesson she would shout her instructions from the centre of the ring, telling me that I was doing it all wrong. Hence the tears. (Hey, I was a sensitive kid.)

These memories re-surfaced today as I agreed to join Rachel for a horse-riding lesson. Yes folks, a horse-riding lesson. I've been reading Susan Jeffers' book Feel the Fear and Do it Anyway, so I thought what the heck! (And the fascist cow/teacher of 30 years ago must be retired, or even dead, by now right?)

When we arrived, the smell brought it all back to me. I could almost feel the tears welling up in my eyes. I actually felt a little nervous. And the pair of crutches beside the door of the reception office didn't help my confidence too much either. Still, Ms Jeffers would have been proud of me, as I followed Rachel into the office and found a suitably sized pair of riding boots and hat. 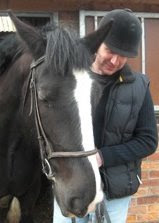 "Rachel, you're on Rosie", the woman behind the desk informed us. "Matthew, you've got Ed". She pointed across the stable yard to a black horse with a white streak down his face. I liked the look of Ed. As we led our horses out to the ring, Ed seemed very laid back, almost not caring. Did he not realise the demons I was exorcising?

Our teacher today was Geena. She was neither a fascist nor a cow. In fact she was really nice. She told us both (me and Rachel that is, not me and Ed...) how good we were doing and she was "very impressed" (her actual words mind) with my rising trot!

The entire lesson passed without a single tear. In fact, I had a smile on my face the whole time.
Posted by Matthew Smith at 22:20