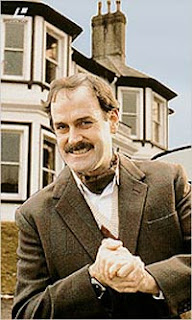 After their recent attempt to kill off the nation's brain cells by broadcasting back-to-back episodes of The Vicar of Dibley, G.O.L.D., the nation's favourite comedy channel (apparently), have redeemed themselves. I just caught the repeat of Fawlty Towers Re-Opened, a two-hour documentary about the truly classic sitcom in which John Cleese, Connie Booth, and others from the show talk about why it was so successful, how it was written, what inspired it, and so on. Excellent stuff.

Fans of the show will remember that at the end of the opening credits of each episode, the letters on the hotel sign were re-arranged by the paper boy to spell out different words like 'Fatty Owls', 'Farty Towels', etc. In fact only one of these was an actual anagram of Fawlty Towers...
Posted by Matthew Smith at 00:56