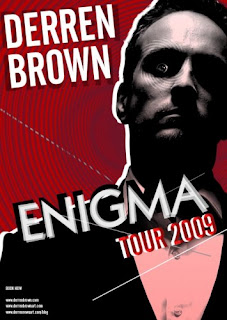 As I've mentioned before, I'm a bit of a fan of Derren Brown. So it was a treat last night to see the man himself in his touring show, Enigma, at the Lowry Theatre in Salford. This was the second time Rachel and I had seen DB in a live show, having seen his An Evening of Wonders show in the West End last summer.

Both shows were excellent. Members of the audience needed on stage are chosen by frisbies thrown out into the audience. At the London show I was lucky enough to be one of about eight on stage at one point for a segment involving pendulums, each made of a large nut tied to the end of a piece of string. Through the power of suggestion the pendulum swings from left to right or in a circle no matter how much you feel you're keeping your arm still.

The best part of the Enigma show comes right at the end which, of course, I can't reveal. Suffice to say, the the title of this post might seem random but it isn't. It seems that DB is in agreement with Spiritual Junkie in so far as nothing is random.
Posted by Matthew Smith at 00:29