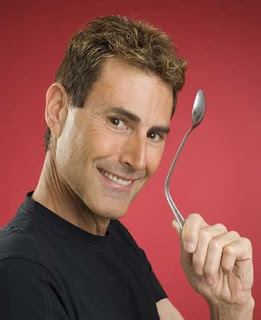 Talking of psychics, when I was a kid Uri Geller was a bit of a hero of mine. I guess I have to use the word 'psychic' loosely as nowadays he refers to himself as a 'paranormalist', whatever that is.

I also use the word 'hero' fairly loosely, but he was a big influence on me. In fact he was probably one of the reasons I became interested in the idea of paranormal phenomena as I already an unhealthy interest in magic and conjuring. Geller seemed to be able to bend metal (more often than not in the form of spoons) with the power of his mind as well as start broken watches and reproduce hidden drawings. What Geller did looked an awful lot like magic tricks but he claimed he was doing it for real. And it started me wondering whether any of this stuff could be done for real. I still wonder.

I was hoping that YouTube might provide a clip from the Dimbleby Show on which Geller shot to fame in the UK in the 1970s, but all I can find on YouTube are clips seeming to show Geller bending spoons in less impressive ways. Either that or clips from the various versions of his recent TV shows in which he leads the search for the Next Uri Geller (this is the title of the German version of the show; in the US it went by the name of Phenomenon, and in Israel it was called The Successor). The show hasn't made it to the UK. Yet.
Posted by Matthew Smith at 23:19