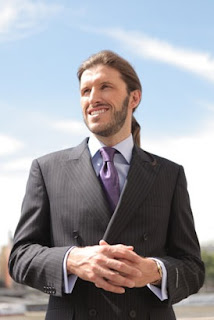 Derren Brown's latest televisual feast, Miracles for Sale, shown last night on Channel 4, was an attempt to expose the methods employed by faith healers. He achieved this by training someone in the techniques and style of preaching typically adopted by these faith healers, with the aim of passing him off as the genuine article. His student was Nathan (pictured right), a scuba-diving instructor, who was only told about the nature of the planned project once he had already been picked from the hundreds of hopefuls who had applied to be 'a star of their own show'.

Nathan was an interesting choice as, apparently, he was himself a believer in God, and so DB was eager to point out that the project was not an attack on faith or religion itself. It was aimed specifically at the multi-million dollar industry that surrounds faith healing, showing how these so-called 'healers' draw upon various scams to encourage people to give large sums of money to their 'ministries' in the belief that such giving will show the strength of their faith in the Lord, and will be repaid many times over.

I'm a big fan of Mr Brown, but the real star of this show was Nathan, aka 'Pastor James Collins'. He really was thrown in at the deep end, and he seemed genuinely ill at ease with the idea of deceiving people. Some of the best bits of the programme were when he stood up to Brown and the production crew after he felt they had sprung yet another change of plan on him. It's a shame his 'revival' meeting at the end of the show drew only a small crowd.

The full show can still be watched on 4OD (at least until 25 May 2011). You might also want to check out Pastor James Collins' fictitious Gifts of the Ministry website.
Posted by Matthew Smith at 10:27