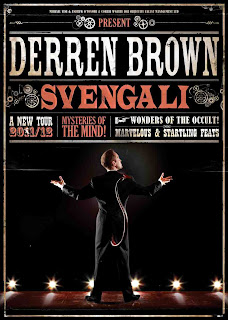 When I tell folks about the 'Million Dollar Psychic' project, one person's name often gets mentioned. "You're learning to become psychic? Oh, you mean like that Derren Brown chap...?" Now, I'm not sure if this is because the people I'm speaking to think that I am wanting to learn to appear psychic. To these people, I clarify that the aim of the project is to see if I can actually discover 'genuine' psychic ability (if such a thing exists).

Alternatively, of course, it may be that they believe that Derren Brown achieves his impressive feats by using his own psychic abilities! This would be surprising, indeed, as Mr Brown is quite scathing about psychics and mediums and often presents his work as a demonstration of how a range of techniques can be used to create the effect of genuine mind-reading and so on.

It would be a touch ironic if many of his fans actually believed he might be genuinely psychic!
Posted by Matthew Smith at 13:09