How did he do it?

Still wondering how Derren Brown predicted the lottery numbers on Wednesday night? Supposedly all will be revealed in The Events tonight on Channel 4 at 9pm. If you missed the live broadcast on Wednesday night you can watch it on YouTube. 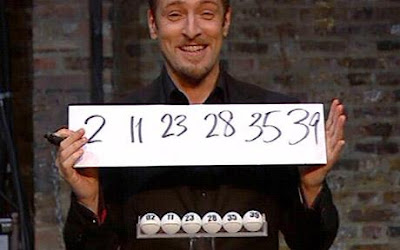 From the moment he revealed his prediction there has been much debate over how he achieved it. Theories range from camera trickery (i.e., the use of a split-screen) to laser technology (a laser beam somehow projecting the numbers on to the ping-pong balls that formed his prediction). Some have even suggested that Derren spent the last year recording all of the possible combinations and splicing that together with the live broadcast. However, I have a feeling it would take longer than a year to pre-record the millions of combinations that could come up! Some of the more common theories have been collected together here.

No matter how he achieved it, Derren Brown and Objective Productions have again produced an amazing effect that has got us all scratching our heads wondering how on earth he might have done it. I know I'll be watching tonight to hear his explanation, whether it be the truth or some other fantastic deception!
Posted by Matthew Smith at 10:33