It's a goat thing 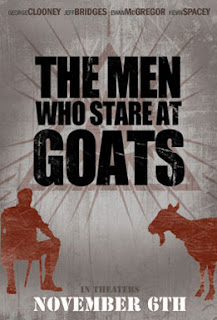 The movie based on Jon Ronson's book The Men Who Stare at Goats is premiered this week at the Venice Film Festival. It's due to be released in in the USA in November and in the UK in January. The film stars Ewan McGregor, George Clooney, Kevin Spacey and Jeff Bridges. You can view the trailer here.

When I read Ronson's book I was aware it was being made into a film, but couldn't really see how it would translate to the screeen. It would seem that the film is inspired by the book. That is, it's a story based upon the ideas in the book.

Don't worry, there are still men staring at goats.
Posted by Matthew Smith at 23:59