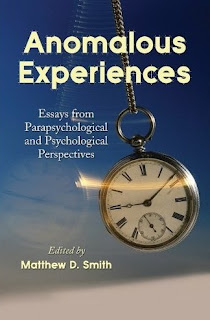 In June 2005, a few of us organised a conference called 'Developing Perspectives on Anomalous Experience'. A mere four and a half years later a book containing the papers presented at the conference has finally been published.

Topics covered include psychic phenomena (like telepathy and precognition), hauntings and apparitions, hypnosis, out-of-body experiences, alien abduction experiences, and even the kinds of experiences people report in seances. Contributors are academics from around the world.

It's hard to pick out a favourite chapter, but I'm particularly proud of the index. It took Rachel and I ages to do that. It's in alphabetical order and everything!

The book is called Anomalous Experiences, published by McFarland, and is available from Amazon.
Posted by Matthew Smith at 09:08