It's not about the monster

There can't be many people who could be towed along the surface of Loch Ness in a giant inflatable bubble and call it 'work'. Steve Feltham can.

I first 'met' Steve 18 years ago. Well I didn't actually meet him, but I felt I did. In August 1992 I watched Steve's video diary that was broadcast on BBC 2. The diary, called Desperately Seeking Nessie, followed Steve's first year as he set out to be a full-time Loch Ness Monster hunter. Yes, you read that correctly, a full-time Loch Ness Monster hunter. For many, the idea of even being a part-time monster hunter may seem a little surreal, but Steve wanted to do it full-time. At the age of 28 he decided to pack in his job, sell his house in Dorset, and end a seven year relationship with his then girlfriend in order to move up to the banks of Loch Ness to search for the Loch's legendary monster. Steve had been fascinated with Loch Ness and the monster that may or may not live in its murky depths ever since he was taken there on holiday as a kid. Since then he had been back several times and had even spent a 3-week holiday at the Loch on the look out for Nessie, weighing up the idea of giving up his job to do it full time. 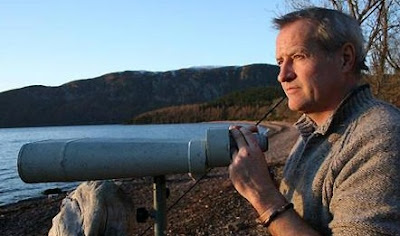 At the time I first saw Steve's video diary, I was 22 years old and I'd just completed my degree at Liverpool Polytechnic. After 3 years' of student-dom, I was now living back at my parents' house in sunny Macclesfield. And, to be perfectly honest, I was pretty depressed. Not that there was anything wrong with my parents' house. Or even Macclesfield. It's just that I hadn't really expected to move back there after my student years, you know? So Steve's video-diary of how he took control of his life and followed his dream of becoming a Loch Ness Monster hunter came at an important time in my life when I was wondering what I might do next. It was an inspiring tale of realising that it is up to each of us to decide what we want to do with our lives and then having the courage to set about doing it, no matter how crazy it might seem to some people. (And let's face it, monster hunter has to be right up there towards the top end of the crazy scale!) In fact, one of the scenes from the video diary that stuck with me for many years was the shot of Steve driving off in his van (actually an old mobile library) in the direction of Scotland with the song Life's What You Make It by Talk Talk playing.

Over the years I had occasionally wondered if Steve had stuck it out. Was he still spending his days staring out over the waters of Loch Ness hoping to see something that would prove that he wasn't wasting his time? Indeed he was. His website, www.haveyouseenityet.com and a couple of clips on YouTube confirmed that he was still there and still making and selling little clay models of Nessie to help fund his research.

And so, during the 'summer' a couple of years ago (I use the word loosely here, as I think the summer lasted for little more than an afternoon) I decided to go and visit Steve. If nothing else, I wanted to be able to tell him how I had found his video diary inspiring and something I still remembered to this day. I dragged Rachel and Freya with me (not literally, Rachel shared the driving, Freya didn't have much choice) and we made a holiday out of it.

When we arrived at the Dores Inn car park, it was busier than I'd expected. The car park beside the pub on the banks of the Loch is where Steve has resided for the last 12 years or so, ever since the converted mobile library that is his home became, well, not so mobile. From this vantage point, Steve has an unparalleled view down the length of Loch Ness. 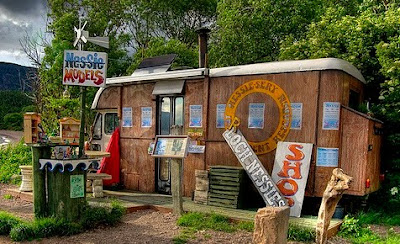 "It never ceases to amaze me, the wonderful and bizarre things I get involved in doing which I never would have done otherwise," Steve tells me when I ask him about his life since he'd decided to become a full-time monster hunter, "just the other day this gang turned up and covered this whole beach with a huge great polythene bubble, which they pumped up to become this 35-foot high plastic clear pyramid!". It turned out to be for a stunt to advertise Scottish Blend pyramid tea-bags, but at the last minute they decided to involve Steve, "they said, right, we're getting the Inverness paparazzi out tomorrow to do a photo-shoot with this giant tea-bag, but what would actually be better is if we could put a monster hunter inside it and tow him around the bay! So the next day, I'm getting towed around, and it was great because you're stood on this plastic skin and suddenly it becomes like a glass-bottomed boat so you can see all sorts of debris that's lying just out here. So I could tick that off as work!". I wasn't sure what surprised me more. The fact that Steve could call this work, or that there was an Inverness paparazzi.

Steve also told me about his friend who has built floats on to the base of his microlight aircraft so that they can go flying up and down the loch, "...which again in a way is monster hunting because you can look down into the water. And it's bloody great fun whilst you're doing it!"

But as we continued to talk about Steve's decision to become a monster hunter all those years ago, I noticed that we talked less and less about the monster, and more and more about what it means to follow a dream. In fact, that was the reason I had wanted to meet Steve. Personally, I wasn't that bothered whether or not there is a monster in Loch Ness, but Steve was. In fact, it was his passion. It was his dream to spend his life as a monster hunter and be the one to get conclusive evidence that Nessie was for real. But he was equally passionate about getting across the idea that, no matter what your dream is, you should do whatever you can to follow that dream. Even if it is as bizarre as looking for the Loch Ness Monster.

At the end of Steve's video diary he concludes, "This isn't just about hunting for a monster, but about having a dream and following it. It doesn't matter if people say you're mad, if you don't go for it one day you may say, 'well, I wish I'd done that when I'd had the chance'. If you don't follow your dreams, the only person who loses is you." 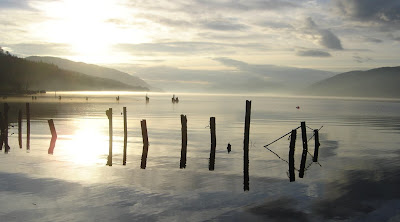 The title of this post alludes to the title of cyclist Lance Armstrong's autobiography It's Not About The Bike. I was lent this by a friend at work about three years ago, and I still haven't read it. I think it's because I have a sneaky suspicion that a big part of it is going to be about the bike.
Posted by Matthew Smith at 12:04