As a little 'experiment' (using the term in its loosest sense) I thought I would use my new(ish) tarot cards to tell me a little something about what lies ahead for me this week. According to the little book that came with the deck of cards I bought (The Golden Tarot by Liz Dean if you're interested...), I can do an eight card spread for the week ahead: 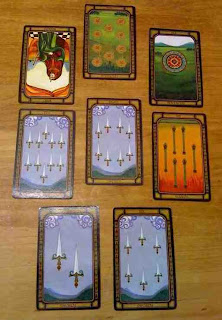 So. It seemed like a reasonable thing to try! My eight-card spread is shown in the picture (right). In case it's not clear to make out each of the cards, the 'Significator', the card in the centre is the Eight of Swords. Then, starting with the card in the one o'clock position relating to Monday and going clockwise, we have the Ace of Pentacles (Monday), Six of Wands (Tuesday), Six of Swords (Wednesday), Two of Swords (Thursday), Ten of Swords (Friday), King of Wands [reversed] (Saturday), Ten of Pentacles (Sunday).

Now, I have just read with interest what the book says these cards are supposed to mean. But I wondered if any of you folks with more experience of reading tarot cards might have some thoughts?
Posted by Matthew Smith at 00:45

Email ThisBlogThis!Share to TwitterShare to FacebookShare to Pinterest
Labels: Tarot