I recently came across something called the Wisdom Project on the Apple website. It was a project led by filmmaker and photographer Andrew Zuckerman in which he photographed and interviewed 51 famous people who were over 65 about life, etc. The famous names included for example Bishop Desmond Tutu, Nelson Mandela, Billy Connolly, Clint Eastwood and Robert Redford. The interviews are edited into an hour long film. 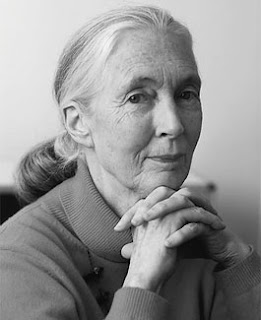 As I was watching the trailer for the film the other day with a friend, one of the talking heads that appeared was Dr Jane Goodall. Jane Goodall is a reknowned primatologist, anthropologist, and conservationist. For almost 50 years she has studied the behaviour of chimpanzees, having arrived at the Gombe National Park in Tanganyika (now Tanzania) in 1960, where she established the Gombe Stream Research Centre. She was one of the first people to observe chimpanzees using tools, something that had hithertoo been considered to be a uniquely huma trait. In 1977 the Jane Goodall Institute was set up with a mission statement to "advance the power of individuals to take informed and compassionate action to improve the environment for all living things". In 2002, Jane Goodall became a UN "Messenger of Peace", and in 2003 she was a made a Dame of the British Empire.

As soon as she appeared on the Wisdom Project trailer, my friend noted, "Isn't she the chimp woman?". Half a century's dedicated service to research, education and conservation encapsulated in just two words: chimp woman. At first, I thought that's hardly fair is it? To simply refer to her as the "chimp woman" after all she's done. But then I thought quite the opposite. If you get to the point where you have been so successful at what you've done in your life that someone can just immediately recognise you as the chimp woman then you must have done something right.
Posted by Matthew Smith at 22:09