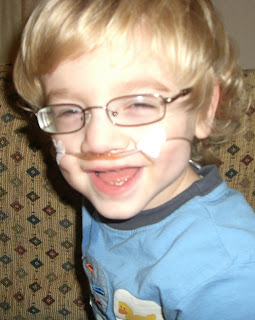 Ross is a particularly amazing little boy. He was born 11 weeks prematurely and has had plenty of medical issues to deal with in his short life so far. He spent the first 5 months of his life in hospital, and is still on oxygen now. Ross is also autistic (or at least he "scores on the autistic spectrum") which effectively means he doesn't seem to understand language. He is blind in one eye and is very short sighted in the other. Oh, and he hardly eats.

The most amazing thing about Ross? He seems to be one of the happiest little boys I know. He's often laughing to himself (about what I have no idea!) and jumps up and down or does a little dance when watching a favourite DVD or listening to music he likes. He's in his own little world, but he seems to like it there.