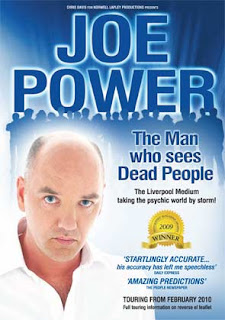 Last night's opening documentary as part of Derren Brown's new series, Derren Brown Investigates featured 'psychic medium' Joe Power, described as 'The Man Who Sees Dead People' (which just so happens to also be the title of Joe's book). One of Joe's claims includes contacting the spirit of John Lennon.

The premise of the programme was that Derren would spend five days with Joe to discover if he really does see dead people, or whether his abilities might be better explained in some other way.

None too surprisingly, Derren suspected that the latter was more likely: A combination of cold reading, warm reading, and a little bit of hot reading thrown in for good measure. Of course, Joe protested, and even accused Derren of... well, I'm not sure what he was accusing him of.

From the moment Derren entered Joe's rather humble looking flat and described it as 'gorgeous', you knew they weren't going to get on. And I suspect that Derren had already made up his mind as to Joe's authenticity. In the end, Joe came across as either deluded in his belief he could contact the dead or an outright fraud. Or a combination of the two.

The most (only?) impressive reading came when Joe seemed to give fairly accurate information to a woman as part of a one-to-one reading in her own house. Even DB seemed intrigued. It only emerged some weeks after filming that she was actually the next door neighbour of Joe's sister! What are the odds...

Update: The programme is now available at 4OD here. Oh, and we have a new Prime Minister.
Posted by Matthew Smith at 08:25