It turns out it was Men with X-Ray Eyes (as opposed to the singular Man). Although it didn't appear as though anyone had X-Ray eyes. The focus of last night's Derren Brown Investigates was the Bronnikov Method, pioneered by a chap called Vyacheslav Bronnikov. 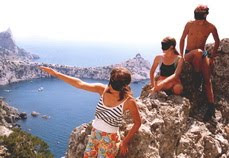 Among the claims made by Bronnikov is that his 'method' can help people see through blindfolds and can even help blind people to see (including those who don't have eyes!). And level 1 of the course costs only 700 Euros. All very intriguing, and all very dodgy-sounding.

The confrontation between Derren 'n' Vyacheslav ended with our man requesting that Mr Bronnikov tell him what was inside a sealed box, something that should be straightforward for a man with X-Ray eyes. Bronnikov declined. Which left us wondering what was inside the box!

My guess is that it was a small yellow plastic duck... on a chain.
Posted by Matthew Smith at 09:06