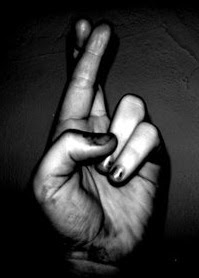 Well, whaddya know... it turns out that keeping your fingers crossed does help after all!

A study to be published in the June issue of the journal Psychological Science reveals that 'activating a superstition' by for example, saying "keep your fingers crossed" can have a real effect and enhance subsequent task performance.

The German researchers had female university students engage in a 'motor dexterity task', which involved getting 36 small balls into 36 small holes by tilting a perspex cube backwards and forwards (you know the kind of thing... those infuriating little puzzles that require a delicate hand!). The students were separated into three conditions. In one condition, just as they were about to start the task, the researcher said the German equivalent of "I keep my fingers crossed!" (which in fact is apparently "I press the thumbs for you!"... but in German). The other two conditions were control conditions. The students in the experimental condition went on to complete the task significantly faster than those in either of the control conditions!