I had no idea what to expect. Remember I had no idea I was going to be in Turkey today until just a couple of days ago, so no chance to read any of the guide books. I was entering un-chartered waters. Fortunately, I wasn't entering alone. Rachel was also hammam-ing, as were another couple.

All guests to the hammam have to wear comedy shoes. You slip these on like sandals but the wooden bases mean that no normal person could walk in them and look normal. The only way of propelling yourself forward is to shuffle. Or at least that was the case for me. Rachel, being a woman, after years of experience of propelling herself forward in a wide range of footwear seemed to be able to walk like a normal person. I looked across at the other couple who were also making their way into the hammam, and noticed they too were managing to walk like normal people. It was only me that was shuffling like a loon.

We propelled ourselves forward (I shuffled, Rachel and the others walked) into the hammam itself, a large marble-walled room in the bowels of the hotel. The first 15-20 minutes of a hammam, so I gather, is to sit and sweat and allow the pores to open. As we sat and sweated and allowed the pores to open, my mind began to wander. Was there anything I knew about Turkey? Anything from popular culture that might give me a hint as to what to expect from my hammam experience? 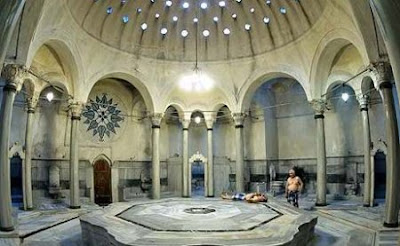 The masseur makes his appearance. A stocky little man with a crew cut with a large tea-towel wrapped around his waist (it's actually called a pestamal). He gestures to the four of us as though to ask "who's first?". A few nods of heads seem to indicate that I am to go first. So I stand up and shuffle forward. He gestures for me to lie down on the large marble plinth in the centre of the room (the Gobek Tasi or Naval Stone). I ditch the sandals and oblige by lying face down on the plinth. I try not to think of the film Midnight Express. His job, I now realise, is to exfoliate. By exfoliate, I mean his job is to rub down my skin with a mitt that is made from the same stuff as a pan scourer. It was taking off the dead skin. There goes my first day's tan, I thought!

A tap on my back told me it was time to turn over on to my back. As I did so, Mr Masseur continued to scrape his brillo pad across my skin. As he moved from my legs to my upper torso, his face was a few inches from mine. Of course, being British, etiquette was uppermost in my mind. What is the proper etiquette in this situation, I asked myself? Do I make eye-contact or opt for a middle distance gaze? As I say, I'm British, so the middle distance gaze wins out and I choose a tile on the ceiling to focus upon.

Another tap, and I'm to sit up. As I do this a second masseur enters the hammam who, I presume, will begin to undertake the same torture I have just been through with the other guests. But no, I am being gestured to make my way over to the othe side of the Gobek Tasi and again lie face down. I do as I'm told. Immediately I prefer Mr Masseur no. 2, for he is the bringer of bubbles. Light, soft bubbles that somehow emerge from a pillow case. And lots of them. He proceeds to wash and massage me from head to toe. It is very, very relaxing.

A tap on my back and I know to turn over. Another interesting-looking ceiling tile catches my attention, saving us both (i.e., me) from any awkwardness. Another tap and I sit up to receive a neck massage that releases a knot or two that I didn't realise were there.

A final gesture brings me to my feet. My new friend rinses away the bubbles with cool water from a metal bowl that he pours over my head and shoulders. He then starts to make a quiet chanting noise that signals a change from cool water to ice cold water! Just as I was starting to like him, as well! It's cold but very refreshing.

By now, Mr. Masseur no. 1 was doling out his torture to Rachel. Although she seemed to be enjoying it. Just wait until you get to Mr. Masseur no. 2 with is pillow case of magical bubbles!

As we shuffle back to reception, I realise I am cleanest I have ever been. Ever.
Posted by Matthew Smith at 00:54