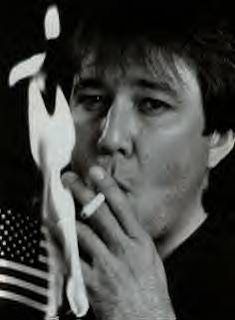 I've said it before and I'll say it again. I'm a big, big fan of Bill Hicks. In my humble opinion, he is possibly the best stand-up comedian to have graced the planet. But as many of his fans will testify, he was so much more than just a stand-up. His routines cut through all the crap that is thrown at us day after day, and his comedy revealed the lunacy that passes for politics these days.

I say 'these days' even though he died 16 years ago. He was just 32 years old. The irony was that his routines from the early 1990s that dealt with US foreign policy, George Bush, and Iraq were just as relevant 10 years after his death. I consider myself extremely fortunate to have seen Bill when he performed live at the Neptune Theatre in Liverpool back in 1992 when I was a student. I had seen him on TV quite a few times before then and kind of expected to recognise most of his material. About 80% of the show was new material, much of it seemingly improvised or highly topical (it was the week after the Los Angeles Riots).

I am therefore, soooo looking forward to seeing American: The Bill Hicks Story tonight. There are many clips from Bill's shows available on YouTube. This one perhaps best sums up his philosophy:

The title of this post? It's how Bill referred to himself.
Posted by Matthew Smith at 12:20