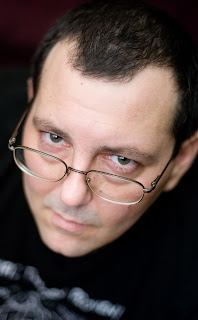 Derren's final encounter as part of Derren Brown Investigates took him to the US to spend a few days with Lou Gentile, a ghost hunter and demonologist. We were treated to a few ghost photographs which, for Lou, provided strong proof of life after death but, for Derren, provided strong proof that we are very adept at seeing meaningful patterns in 'noise'. Especially when we're highly motivated to look for them.

Much of Lou's 'data' were in the form of Electronic Voice Phenomena, or EVP. As part of an investigation of a haunted house, Lou would ask questions out loud to the spirits thought to be haunting the place, leaving a gap for the spirit(s) to respond. A digital voice recorder placed on a table recorded the questions along with any answers. Typically, no response would be heard back at the time, but when the recording was played back sounds could be heard in the gaps between Lou's questions. Many people, such as Lou, believe that these sounds are the faint voices of spirits trying to communicate from the other side. The difficulty is that these sounds, much like the ghost photos, usually require a fair bit of interpretation to hear what is supposedly being said. What Lou hears as a message from the dead, you or I (or indeed Derren) might hear as unintelligible crackle.

If these noises aren't voices from beyond then what might they be? A useful contribution to the programme was made by a forensic audio analyst who pointed out that the noises are likely to be an artifact of how these digital voice recorders work, particularly those that are voice-activated. As is often the case with claims of apparently paranormal phenomena, a more likely explanation tends to be quite mundane but is often overlooked by people wishing to believe that something supernatural is happening.

A rather poignant end to the programme was the news that Lou had died a few months after the filming. I wonder if he's been in touch yet?
Posted by Matthew Smith at 10:34