All the fun of the psychic fair (pt 1)

Apologies for the delay in posting an update following Saturday's psychic fair in Witney. Without going into too much detail I (along with Rachel) have been pretty ill since Sunday with liquids forcing their way out of both ends (maybe that was too much detail?).

Anyway, the psychic fair... I was getting all psyched up for it especially after we sent out the press-release in the middle of last week. BBC Oxford picked it up and ran a short piece with me for BBC South News on TV on Friday evening and I did another brief interview for BBC Radio Oxford on Saturday morning. Hopefully these two dips into the local media would bring a few folks looking a free tarot reading to my stall at the fair.

The fair opened at 10am and Rachel and I arrived at quarter to 10. Some of the other stall holders had apparently been there from 8.30, setting up their displays of crystals, wands, etc. We didn't exactly have a lot of setting up to do. A deck of tarot cards doesn't need much setting up, other than a shuffle. Fortunately, Deb, the organiser of the fair had at least provided a dark red tablecloth, but other than that we were working bare (as it were). To help create the right effect Rachel nipped over to one of the stands to buy me an amethyst crystal (for grounding) and a small laughing Buddha for good luck. £5 well spent.

With a couple of minutes to go before the doors opened I had a quick chat with my neighbours for the day. To my left were Elaine and Mark, who were also psychic fair virgins! (As in this was their first time with a stall at a psychic fair... what else could that mean?) Elaine is a psychic artist who will draw your spirit guide. Mark is her partner. Actually, I'm assuming Mark is her partner as the conversation didn't get much past the fact that Elaine is a psychic artist (and, of course, that they too were psychic fair virgins). To my right was Malcolm or, rather, Psychic Malcolm to give him his full name. I felt I had more to learn from Psychic Malcolm as he, too, was offering tarot readings. I told him what I was doing there, although I think Deb had already explained what I was up to. I was concerned that Malcolm might think I'd draw customers away from his stall given that I was offering tarot readings for free. But I explained that anybody getting a reading from me would be required to also have a reading from another reader at the fair with which to compare it to. He was quite happy with that.

To be honest, my concern wasn't so much that I would be drawing people away from the 'real' psychic readers at the fair, but more that I wouldn't get anyone coming to my table for a reading at all. I mean, despite the red tablecloth (thanks Deb) and my lucky Buddha and crystal (bless you Rach), my table looked pretty crap. What's more I was tucked away in the far corner of the hall and, to make things worse we hadn't even thought to make a sign. No sign! What were we thinking?! Why hadn't we made a glossy sign saying "FREE READINGS"? A sign like that would have surely attracted some attention. Even Psychic Malcolm had a sign saying who he was (he was Psychic Malcolm). We did consider making a sign there and then, but the only paper we had were the short questionnaires we were planning to give my 'clients' (if I had any) to complete after their readings. I didn't feel that a hastily hand written sign on the back of a piece of A4 paper was going to do the trick. It could do more harm than good, especially as we didn't even have a pen. The sign would have had to be written with one of the pencils Rachel had rushed out to buy for people to complete the questionnaires!

I thought it might be a good idea to enlist Psychic Malcolm's help. He seemed to know what he was doing. I mean, he had a sign and everything! I had a feeling that he'd probably attract a fair few customers throughout the day so I asked him if he could mention my offer of a free reading to the folks he gave a reading to. He was more than happy to help.

"Malcolm," I said, "I'm a little nervous about what lies ahead."

"Don't worry," Malcolm reassured me, "you'll do fine." I wish I had his confidence. Malcolm proceeded to talk me through a little how he would conduct a tarot reading, while also asking me how I was planning to conduct mine. "You going to get them to cut the deck in two?" he asked. "Er, no," I replied. The little book that came with my tarot cards had said nothing about cutting the deck into two... only to get the person for whom you were giving the reading to shuffle the cards! Malcolm went on to lay out 16 cards into four rows of four, quite different from the Celtic Cross spread using ten cards that I was planning to use. As he started to offer interpretations of the cards that didn't seem to match what I had learnt for each card, I thought I'd better stop him.

"Thanks for the help and advice Malcolm," I said, "but to be honest, this is confusing me more!"

As the doors opened, and people started to trickle into the hall, I wandered back over to my bare-looking table and sat down behind it. And I waited.

What had I let myself in for? 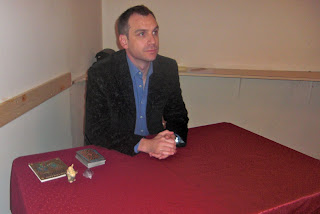