All the fun of the psychic fair (pt 2) 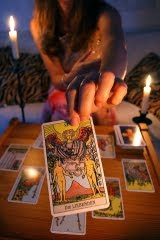 So there I was, sat in a dimly lit corner of a hall in the centre of Witney in Oxfordshire, flanked by a psychic artist and a Psychic Malcolm, waiting for my first client (or subject or victim, depending on your choice of terminology!).

For those of you who aren't familiar with the town of Witney, it's a small market town about 12 miles West of Oxford, with a population of a little over 20,000 people. Right now, all I needed was just one person to meander up to my table and ask for a reading. And then, next thing I knew someone had walked up, sat down in the chair opposite me and asked for a reading!

I was surprised who it was. It was Psychic Malcolm. Apparently, in the thirty years that Malcolm had been giving readings, he had never actually had a reading himself. I felt honoured that Malcolm, nay Psychic Malcolm, would have me be the first and only person to have ever given him a reading! I also felt a little intimidated as I'd be sure that he would be looking at the cards as they lay on the table thinking, "no, no, no... that card doesn't mean that!" However, it would be a start. I'd be able to have a practice run with someone who would no doubt be supportive. I asked Malcolm to shuffle the cards (I didn't ask him to cut the deck in two as PM had previously suggested) and take out ten cards. When choosing cards for your reading, it is advised by those in the know that you should calm your thoughts and to pick out cards that you feel 'drawn' to. That is, you shouldn't necessarily just count off ten cards without giving it some care and attention. Of course, sceptics and cynics would argue that it makes no difference as you're just pulling out cards at random. But tarot theory (or should that perhaps be tarot lore) is that you will be drawn to cards that are meaningful to you at that time. Whether or not there is any truth in this or if it's just bunkum, I thought I should at least ask Malcolm to take out ten cards he was drawn to. I also suggested that if he had a specific question in mind that he would like to be addressed by the reading, then now was the time to clear other thoughts away from his mind and to hold that question firmly in his mind. Whether he did any of his or not... we ended up with ten cards in a pile on the table.

I proceeded to turn over the cards as I lay them out in the formation of the Celtic Cross. The first card in the centre of the table, the second lay across the first, and the next four placed in front of, behind, and to the left and right of the first two cards. The final four cards were lay in a line to the right of the cross formed by the first six cards.

Malcolm looked down at the cards, and I saw his eyes dart from card to card as if to take in all the meaning that was there. And I could imagine a coherent reading was immediately forming in his mind based on what he saw. He looked up at me expectantly. I was still racking my brains, going through the peg system I had used to try and remember the meanings of each of the cards and find a way of transforming the key words associated with each card into something meaningful to say about Malcolm. I don't think either of us would have been impressed if I'd come out with something like, "I get the feeling you're quite an intuitive, dare I say, psychic person...?"

Eventually I was able to craft (or more accurately cobble) together a 10 minutes reading that Malcolm seemed quite happy with. Or at least he seemed quite happy with how I delivered it. And it did help settle my nerves. Moreover, while I had been giving Malcolm the best psychic reading he had ever had, a queue had formed. Perhaps queue is too strong a word. Is it possible to have a queue of just one person? Still, it was one person! A real person! And he was waiting for me! This was it. My first real customer!

As Malcolm stood up and wished me luck for the rest of the day, the young man who had been waiting walked over to say hello and shook my hand. His name was Sam and it turns out he was a local magician who had seen small piece about my project on magicweek.co.uk. As is the case with many magicians, Sam was rather sceptical of the whole idea that tarot cards might be able to convey some kind of mystical information about our lives. I explained a little more about the project as a whole, telling him of my intentions to see if I could develop my psychic abilities for real. He was still sceptical. And understandably so. As I heard myself describing the project and my plans for the coming year, I felt my own scepticism rising within me. What was I thinking? I had left behind a perfectly good, safe, academic position in order to learn to become psychic! Oh but it'll be alright because at the end of the year I'll take a million dollar challenge to prove that I really am psychic. I was clearly deluded. And it was going to take a lot more than a lucky Buddha to save me.
Posted by Matthew Smith at 17:47