All the fun of the psychic fair (pt 3)

One of the main reasons for my doing the psychic fair was so that people who I gave readings to could compare the reading I gave with a reading they received on the same day from another reader. For practical reasons, this meant I could justify giving readings for free as customers would be required to still get a reading from someone else so they had one to compare it to. If I just said come and get a free reading then it might understandably upset some of the other readers, and I didn't want to upset my new friend Psychic Malcolm who, after all, does this for a living. From my own perspective, it would allow me to get a sense of how meaningful my readings were. Were my readings as good as other readers at the fair? Or was I spouting meaningless drivel whilst the other readers were tapping into some mystical source of knowledge? Or, dare I say, the other way round? 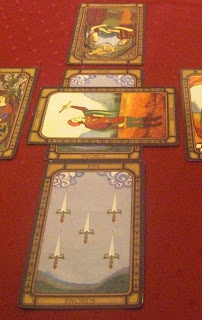